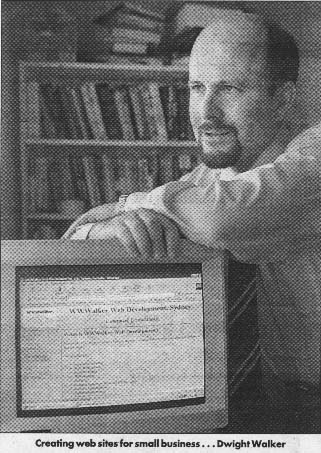 Businesses large and small have entered for the Western Sydney Industry Awards for 2000.

Dwight Walker of Merrylands' W W Walker Web Development Pty Ltd might be considered the proprietor of a very small company since it has only one employee, himself, but because its outreach is so wide it could also be thought of as a potentially large company.

"With a web company you don't have to be big," Dwight Walker said. "You don't need an inner city office. You just need yourself and your computer."

Creating web sites for small businesses is the core of the W W Walker Web Development Pty Ltd company but Dwight is better known in the US than he is in Australia.

He has taken western Sydney to the world through his creative abilities.

"I am well qualified to work in any IT situation but I preferred to work alone. I didn't want to be slotted into a permanent area in some big group where I might not be able to be as creative as I like to be."

When Dwight stepped away from his work as a research librarian at the Commercial Economic Advisory Service of Australia and took up with the Internet he was expecting Australian clients. Instead he found himself rushed by Americans.

"Australian companies were slow to react to the Internet. The Aussie temperament seems to require much kicking of tyres and walking round and round objects before they commit themselves.

"Australians are coming on board at a great rate now, though I find a lot of my contacts are by word of mouth. Networking is so important here. You seem to need to be part of a club before you can be trusted in Australia."

Dwight, who was recently in the US, found he could have set up an office there very easily and was urged to do so, but he chose to come back to western Sydney.

"There is something very laid back and wonderful about Australia. It's not an attitude that works well for business but it's great for everything else."

Dwight Walker has found some drawbacks to creating his business in Australia.

"I feel our politicians are set in the 1950s. When you look at business drawbacks like the Capital Gains Tax it really turns you off. I will soon be looking for venture capital here so that I can develop a new program I have invented which could take the IT world by storm.

"Raising capital would have been very easy in the US where I was being offered the world. I've yet to see what happens here."