In 1998 Tasmania Online by State Library of Tasmania won Web indexing award I was judging for Australian and New Zealand Society of Indexers and annual conference was hosted by University of Tasmania Hobart where award was granted. Unfortunately I could not attend.

For 2008-2011, Past President of MEPSA (medical group) (Molecular and Experimental Pathology Society of Australasia) was Associate Professor of Faculty of Health School of Health Science of University of Tasmania Launceston.

I visited Latrobe in September 2012. Vodafone has excellent speed and coverage here. Optus is hopeless in Latrobe and Devonport. Launceston is a central city to land in.

There were serious floods in Northern Tasmania including Latrobe where roads were swept away. 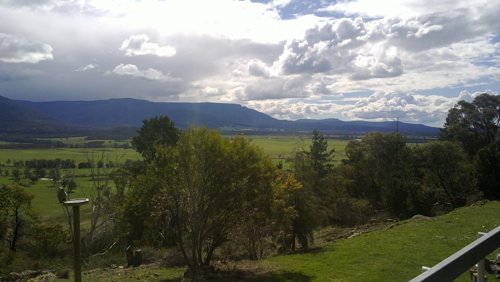 Fusion Australia is a Christian group I did volunteer work with in Canberra and Orange.

In October 2012, my sister and I visited Poatina. It is an old hydro town from 1950-1969. Now it is pretty much empty and taken over for conferences and events by Fusion Australia. It has a Chalet motel (Golden Chain), backpacker accommodation, coffee shop and dining hall, cabins, community hall, radio station, shops, petrol station, golf course and about 60 workers' houses for about 100 people living onsite to maintain the centre and train Fusion staff. About 1km from the main centre, there is the Poatina Arts centre which does glass blowing and a new Trinity school, library and hall from K-12 with about 20 students. This village is for troubled youth and gives them a safe Christian environment to develop in. The hydro power station is 5km west of Poatina at the foot of the Western Tiers massive mountain range which supplies 12% of Tasmania's power from a turbine 120m under the ground with no ugly cooling tower like coal-powered generators have in NSW near Lithgow. The general office is near the entrance where people meet or find things out. There is a general store and post office. It is best to email or ring ahead to get someone to meet you if you are visiting. Connections to Launceston airport can be arranged if given notice. This has huge potential and is a golden opportunity to develop worldwide Christian workers from an Australian training centre. It just needs more volunteers and investment to get it going more.

Tasmania could sell hydro power to Victoria when their coal-powered generators close down. This is what happened in April 2019 Federal Budget.

Faith and the Arts 2013 - Sophie from Biz Adams on Vimeo.

In March 2016, due to BassLink data cable cut due to electricity cable upgrade next to it, TPG which supplied 30% to 40% of Tasmania with bandwidth, had poor bandwidth expected to last next 2 months. Tasmanian government forced them to buy Telstra Wholesale bandwidth. TPG knew months ahead and did not plan to spend money on Telstra. TPG owns iiNet and Internode, a monopoly.

In September 2012, the milling company Gunns closed as bankrupted by ALP/Greens State Government. This is a dramatic effect from too much Greens power.

This is a beautiful city of murals. Well worth a visit.